Has Tigo lost its way in Africa?

Has Tigo lost its way in Africa? I only pose the question because in its second quarter report for 2013, its subscribers numbers by African operation appear flat or in decline (see figure 1).

Or take Ghana. This is a highly competitive market, which last year saw the arrival of Nigeria's Glomobile. Yet despite Glo's poor early uptake, Tigo ended 2Q13 with 3.3 million subscribers, down from the 3.63 million, which it had at the end of 3Q11.

In fact, the only market in which Tigo has reported a rising subscriber base is Rwanda, which has risen from 1.22 million at the end of 2Q 2012 to 1.61 million a year later. 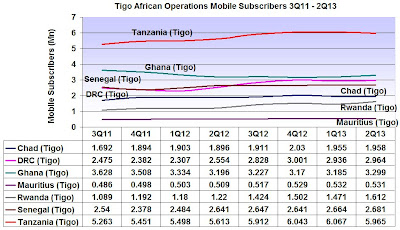 Now it could be that these particular markets are currently experiencing low growth, and that Tigo is performing well against its competitors. But remarkably all the major markets - Ghana, Tanzania, DRC, Senegal and Rwanda - have all shown healthy growth during the period. The table below shows the performance of Tigo competitor's in its African markets.

The other operators in Ghana (so now excluding Tigo's subscribers) have added some 5.3 million mobile subscribers in the eight quarters examined; Tanzania's non-Tigo subscriber base flattened recently but nonetheless has added around 5 million. The DRC's other operators has recorded just under 5 million net additions, and Senegal added 2.5 million. Even Rwanda chalked up 2 million. 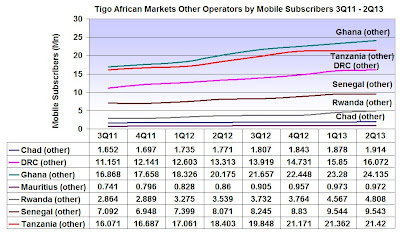 In its 2Q 2013 report Millicom noted that it is now reinvested in Africa, where it said 'the business needed support for its networks and brand'. Some of the problem may well be that it has other investment priorities, as in the second quarter it invested some USD 154 million in capex, including USD 15 million in spectrum, in South America. The spend will return to Africa in 2013, with the capex to revenue ratio peaking at around 20%, excluding spectrum acquisition. This, Millicom notes, will be driven by continued investments in 3G 'capacity and coverage, notably as we roll out further countries in Africa'. Welcome news indeed.