How far has the Saudi mobile market fallen, and will a trio of MVNOs be enough to restore it?

But a check on the Website of the Saudi Arabian telecom regulator, the Communications and Information Technology Commission (CITC), shows a similar pattern but with a differing order of magnitude. CITC reports there were some 53.0 million mobile subscribers at the end of 2012; down from 53.7 million at the end of 2011.

This is a significant variation - either CITC is overstating the market by 120% or Middle East Com are understating it.

Back in 2008 the regulator rebuked mobile operators for using differing criteria when publishing their data, asking them to use the widely adopted 90-day criteria, as endorsed by the International Telecommunications Union (ITU). The end result was that Saudi Telecommunications Corporation and Mobily, a unit of the UAE's Etisalat, simply stopped publishing their subscriber numbers.

The ITU in its annual data round-up, however, has echoed CITC, so suggesting that CITC is is the data source.

The mobile operators should know what their competitors are doing, particularly in those markets, which have an established interconnect, which Saudi Arabia certainly is. Zain has laudably reported on the market since its launch in August 2008.

The Zain data plots a middle road, following the CITC data plot for the first few years, and then falling towards the Middle East Com totals in the later periods. 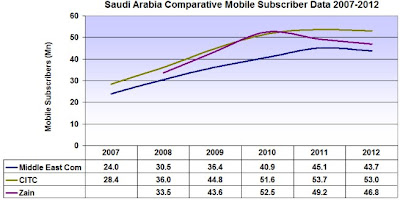 Whatever, the Saudi Arabian market remains a major market, and one that is shortly to be exposed to a multitude of MVNOs. CITC confirmed at the end of June the winners as Virgin Mobile Middle East & Africa (VMMEA) (hosted on Saudi Telecom Corporation's network); Jawraa Lebara (Etihad Etisalat- Mobily) network; and Dubai-based retailer Axiom Telecom (Zain Saudi). The MVNO Directory provides a list of current MVNOs operating in the Middle East.

Local companies FastNet and Safari were the losing bidders. CITC said in a statement it is looking to improve the level of telecom services and information technology, whilst seeking lower prices and improved customer care, and stimulating competition. The three now have till the end of September to provide the documents to move to the next phase of obtaining a licence.

Attempts to increase competition in Israel has taken a similar path, with both new MNOs and MVNOs entering the market, but right now the impression is that the incumbents are struggling to justify network investment whilst they see their subscriber bases are being cannibalised.

Whilst the three data sets cannot agree the size of the Saudi market, the one thing they are agreed on is that subscriber numbers peaked at the end of 2011. It will be very interesting to see how the market now responds with the new players going forward, although one cannot help but think there will be a increased number of players chasing an ever decreasing number of prospects.

Posted by John Summers at 17:04 No comments: Links to this post