BlackBerry most used smartphone in Africa according to Facebook

Smartphone usage in Africa is not always easy to determine, particularly as there is multiple SIM ownership (subscribers have more than one subscription). Although many networks now provide 3G, and 4G is live in a small number of markets, the distribution of broadband - an essential element for the effective operation of a smartphone - is still a very long way from being universal.

When a smartphone is acquired, it needs to be used for something, and the social networking site Facebook is generally regarded as one of the more popular Web destinations in Africa, and it provides some very useful data relating to device usage, which can be extracted country-by-country.

It follows that the Facebook membership will be atypical in that as a group, its members posses a mobile device capable of supporting access to Facebook. In this respect, smartphones are an ideal platform, although Facebook also logs access via Feature Phones. The closure last week by Standard Bank in South Africa of its WAP banking portal comes as no surprise, and it has to be said that Web access via WAP was a curiously frustrating experience.

It can be expected that Facebook users represent a significant proportion of the cohort able to access the Web and therefore the Facebook data is likely to mirror the market as a whole in terms of the popular devices.

It is perhaps not surprising to see Feature Phones accounting for 46 percent of all Facebook mobile users. 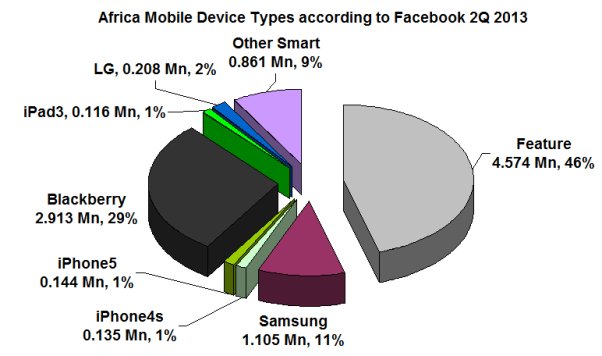 The BlackBerry has enjoyed greater popularity in Africa than elsewhere, and the Facebook data bears this out, with it being the dominant device with some 2.91 million users. LG is placed second with some 208,000 devices. Facebook is able to differentiate between the different Apple devices used for access. Sony is ranked fourth, and Samsung seventh. HTC is in tenth slot with some 98,000 devices. 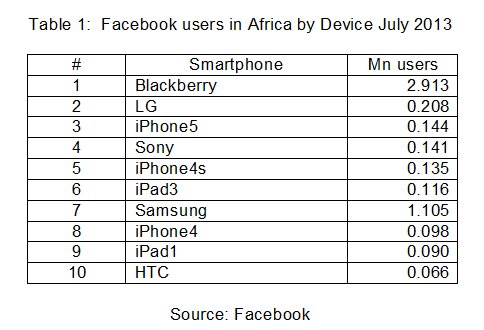